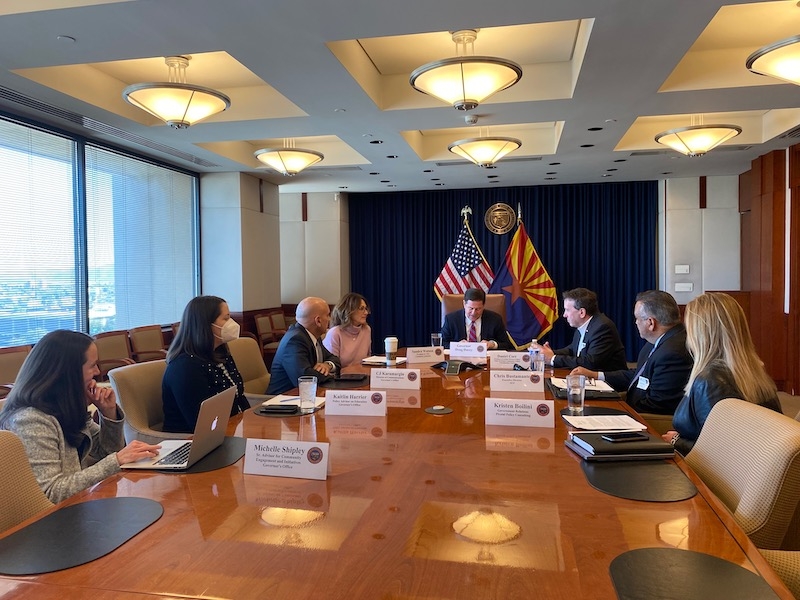 Governor Ducey, Dr. Daniel Corr of Arizona Western College All About the Economic Benefits of the Workforce Acceleration Program

Funding for community colleges is a top priority

Arizona is taking a proactive approach to maintaining this economic momentum – aligning industry with education.

The Governor’s proposed budget calls for the creation of six Workforce Accelerators in collaboration with community colleges and industry leaders. Intensive and advanced manufacturing training centers will equip Arizonans with the skills needed for the jobs of today and tomorrow.

Once built on construction and tourism, Arizona’s economy is now more diversified, with a strong base in manufacturing.

“Arizona has seen a wave of manufacturing success across the state,” said Sandra Watson, president and CEO of Arizona Commerce Authority. “Arizona’s state-of-the-art manufacturing training centers are critical to maintaining the manufacturing momentum our state currently enjoys. This provides our existing employers with work-ready talent and makes Arizona more competitive in attracting additional operations to our state.

Accelerators will reflect the success of Driving48, bringing together higher education, the public sector and industry to improve the skills of Arizona’s workforce. Drive48 was launched at Central Arizona College in partnership with Lucid Motors.

The meeting relied on the governors roundtable with community college leaders last week. Leaders from 10 community colleges highlighted the governor’s commitment to workforce development, noting how accelerators would unlock opportunities for all, especially in rural counties.

Announced in Governor Ducey’s 2022 State of the State Address, Workforce Accelerators will be paving the way for the workforce of tomorrow and further accelerate Arizona’s economic momentum.

As a key selling point for many companies, workforce and talent development is essential for a growing economy.

Much of this momentum can be seen in rural parts of the state.

These victories build on Arizona’s job growth over the past seven years. In January, Governor Ducey announced Arizona has created 400,000 jobs since 2015 and has 3 million jobs for the first time in state history.

Arizona has a history of strong partnerships between universities, industry leaders and the public sector:

In March 2021, Arizona launched Drive48, a state-of-the-art manufacturing training center in Pinal County. The state-of-the-art facility serves the region and state by providing a training center for high-tech manufacturing jobs in areas such as automotive assembly, advanced manufacturing, heavy equipment and more. Based at Central Arizona College in Pinal County, Driving48 was created in partnership with local government and industry partners, including Lucid Motors.

CP Technologies has partnered with Embry-Riddle Aeronautical University and Yavapai College to foster an innovative ecosystem and plans to leverage the impressive talent produced by these educational institutions in its hiring efforts.